The process of peeping into the past to deduce mankind's social, cultural, economical and technological progress through time is an extremely difficult and arduous process at best. Historians have a number of methodologies and tools to help them reconstruct the past.

The geography of a region plays a major role in influencing its history. Geography gives the broad context on which to base an understanding of the pattern of historical progress of the human society in that region. Knowledge of geography of a region helps give a proper perspective to the study and analysis of past events.

Historical sources are the sum total of all evidence left behind by past human society which help in reconstructing history. For studying the details of past cultures, historians depend a lot upon historical sources to tease information out of them. There are two major categories of historical sources – literary and archaeological.

Literary sources consist of all writings of the past which can help piece together the political, economic, social and cultural dimensions of those times. They are categorised into

Literary sources can be in two forms: as manuscripts or as textual literature.

A manuscript is an ancient handwritten book or document, written on parchment, papyrus, palm leaves or on bark from trees like the birch, which has survived through the ages.

Historical literature can be classified into (a) historical works and (b) biographies.

Historical works are those which have recorded the political, economic, social and cultural attainment of the human society. Biographies honour the life and achievements of rulers, and are often partisan.

Secular texts describe the political, economic, social and cultural life of those times. They also include treatises on the arts and the sciences.

Foreign accounts comprise writings by foreign authors and travelers on the region under historical study. 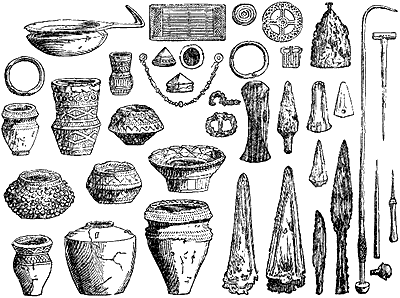 Archaeological sources comprise material remains (artifactsAn artifact is a historically important object made by human hand a long time ago.), bones, old ruins and monuments of past human societies and activities. The artifacts may be in the form of tools, pottery, coins, sculpture and carvings.

Archaeological sources are categorised into

Inscriptions are writings engraved in historical artifacts of permanent nature like stones and metal plates. The study of inscriptions is called Epigraphy.

Inscriptions are generally of three types:

Inscription are considered reliable because of they are available in the original form, as compared to information from literary sources, most of which are copies of the original and so might have been changed or modified. Inscriptions which contain dates help determine the time line of events and periods of rule of monarchs. The geographical spread of their discovery assist historians in resolving the extent and influence of kingdoms or religions.

Numismatics is the study of historical coins. It helps to determine the territorial extent of past ruling powers, their periods of rule, and their chronology. The symbols, figures and legends on the coins throw light on the administration in the region. The number of coins and the metals used to mint them (gold, silver, copper etc.) also give an idea of the prevailing economic conditions.

The first order of business after securing the material remains is to date them. Some artifacts, like coins, are self-dating, while others might have references in written records. Still others can be dated using relative dating and cross dating principles.

The radio-carbon dating technique is used for dating those remains which are associated with organic life. Plants absorb, and maintain, a certain level of radioactive carbon (C-14) from the atmosphere. C-14 is passed into animals as they feed off plants and other animals. When an organism dies, the C-14 keeps on decaying radioactively without being replenished. Since the rate of decay of C-14 is known, measuring the remaining quantity can help date organic remains.

However, radio-carbon dating is only accurate for artifacts less than 50,000 years old.

Thermoluminescence dating is used for inorganic material that have been baked, such as pottery and terracottaTerracotta refers to unglazed objects made by baking brown-red porous clay.. This method of dating can be precise up to 200,000 years ago.

Potassium-Argon dating is used for volcanic rocks, while electron spin resonance dating is employed for dating bones and shells.

History
★Reconstructing the Past