Distance is defined as the measure of space between two points in units of length, such as the meter.

When an object travels from position A to position B (Fig. ), the total length of the path taken to reach B from A is the distance traversed by the object. Distance is usually represented by the variable s.

Displacement is the straight-line distance between the starting and ending positions of a body. In Fig. , the length of the straight line connecting the two positions A and B is the displacement.

Thus, while distance is a measure of length without regard to direction, displacement measures the change in a body's position in a straight line from the start to the end position.

To specify a body's position moving along a straight line, we need to mention its distance from the origin, as well as the direction (positive or negative) relative to the origin.

Generally, displacement in one-dimensional (straight-line) motion is represented by x. To indicate the direction, a positive or negative sign is prefixed to the displacement value. Thus a body, whose position is defined as x = +6m is positioned 6m from the origin in the positive direction.

Speed is a measure of how fast a body is moving. It is generally represented by the symbol v.

As is clear, speed is a derived quantity, "derived" from the fundamental quantities of length and time.

Eq. can be rearranged to give equations for:

These need not be committed to memory as long as you remember the original equation Eq.

A car covers 30km at an average speed of 60kmph. How much time did it take to cover the distance?

We know that , hence 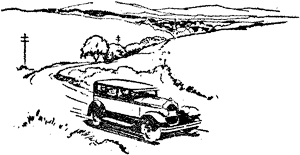 In real life, a moving object like a car will cover a distance in a given amount of time but at speeds which keep varying during the entire time period. It starts from rest (zero speed), speeds up to continue moving at varying speeds depending upon the road/traffic conditions, and finally slows down to a stop (zero speed) at the destination. Suppose the car covers 40 kilometers in 2 hours. When we divide the total distance covered by the time taken, we get the average speed as 20kmph, but the car actually might have had speeds as high as 80kmph at some points in its journey. Still, the concept of the average speed is very useful in all sciences.

A body is said to exhibit uniform speed if it moves at a constant speed over an interval of time. This means that the body covers equal distances in each small interval of time within the entire period of motion. A skydiver jumping off a plane from a great height finally reaches a uniform speed (of about 50m/s) as she falls towards the earth. This implies that on achieving uniform speed, she covers 50m each second.

A distance-time graph plots the distance covered by a moving object against time. The distance is plotted against the y-axis, while the time against the x-axis.

Table shows data taken of a bus journey from a bus stand (as the starting point) which begins at 9:00 am and ends at 12:00 noon. The increasing distances of the bus from the bus stand are tabulated against clock time. The journey finally ends at 240km from the stand.

Notice from the table that in each interval of time (of 30min each), the bus covers equal distances (of 40km each). This is an example of uniform speed. On calculation, the average speed comes out to be 80km/hr.

If the table data is plotted, with the time along the x-axis and distance along the y-axis, we get the distance-time graph as shown in Fig. .

The plot of distance-time graph can be utilised for calculating the speed of the body. Look at the distance-time graph for uniform speed as shown in Fig. . Consider two instants of time, t1 and t2, when the body is at distances d1 and d2 respectively from the starting point.

Thus, during the time interval t2 − t1, the body covers a distance of d2 − d1. Using the formula for speed, we find that

Now, is a right-angle triangle (right-angled at C), and if is designated by , then, from trigonometry, we have, for the definition of the trigonometric ratio tangent (abbreviated as tan)

is mathematically equivalent to the slopeThe slope of a line is a measure of how steeply the line is inclined to the horizontal. Mathematically, it is the ratio of the "rise" (vertical change) to the "run" (horizontal change) of the line. of the line AB.

Now, since the steeper the line, the greater the slope, it implies that steeper lines on the distance-time graph indicate greater speeds.

Since the tabulated data in Table provides data only for a few instants of time and the distances corresponding to them, which happen to be such that the bus covers equal distances in each interval (a very rare possibility in real life), the points plotted on the distance-time graph can be connected by a straight line. However, had the data contained smaller intervals of time, such as the distances for every 10 minutes time interval, the plot could show variations in the average speeds during those smaller intervals of time.

As illustration, consider the more detailed distance vs. time data points for the same bus journey (with time intervals of 10 minutes) in Table . The original data from Table is contained in Table , and is shown in bold. The resulting plot is depicted in Fig. as a red line, which is not a straight line. Yet when we consider only the original data (with half-hourly intervals), the plot of the data in Fig. (shown in ash colour) is a straight line as in Fig. .

So, as we go into measuring the bus journey in greater detail, the variations in speed become evident. It is when the time intervals get smaller and smaller (5 minutes ... 1 minute … 30 seconds … 1 second …) that the concept of average speed starts translating to the concept of instantaneous speed, where instantaneous speed is mathematically defined as the distance traveled by a body (in a very small interval of time) divided by the time interval.