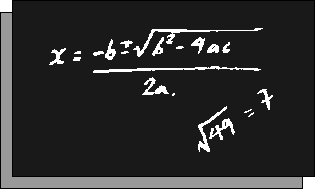 Mathematics is an ancient science which uses logical reasoning, counting, measuring and calculations to make sense of the real world. It a very pervasive subject which is used in its simple form in most of our daily activities. Mathematics is used by most other sciences for providing precision and accuracy to their results and conclusions.

Those involved in the study of mathematics and its applications are known as mathematicians.

Another classification of mathematics divides it into subjects like arithmetic, algebra, geometry, trigonometry and statistics.

The word "arithmetic" derives from the Greek word "arithmos" meaning "number." Arithmetic is the study of nature and properties of numbers, including the basic operations of addition, subtraction, multiplication and division, as well as raising powers and taking roots. These concepts are employed for calculations involving fractions, percentages, ratios and proportions.

Often described as "arithmetic with letters," algebra (unlike arithmetic which deals with specific numbers) brings in the concepts of variables which expands the scope of arithmetic through the use of equations. It can be used for solving problems of much greater complexities than arithmetic can.

The world "geometry" means "earth measurement" in Greek. It deals with points, lines, surfaces, solids and their relationships. Geometry precisely defines different types of figures and provides methods for constructing them. It not only gives a wealth of important facts about the figures, but also methods to proves them following simple lines of reasoning.

Trigonometry is the study of triangles, angles and their relationships through the use of the three main trigonometric functions of sine, cosine and tangent.

Statistics deals with the study, classification and analysis of raw collection of data. Statistical techniques help find hidden meanings and significance, patterns and trends from the raw data.